Summer time is upon us and as the heat builds there are two really good fishing bites that are both tremendously exciting.  Obviously there is the summer top-water bite using anything from torpedoes to working the Lilly pads with a floating frog-style lure.  However, the other way to fish the summer time bite is to go deep.  It is amazing how many people skip this zone when some of the biggest fish in the lake choose to suspend in the cooler environment of fifteen feet or deeper.  I hope to give you some really good tips on how to get at these fish without killing yourself in the process.

If you are a seasoned fisherman, then you know the power of a good selection of crank-baits to get fish to engage and feed sometimes even when they aren't in the mood.  Crank-baits produce the reaction-bite that bass are renowned to have and one of the main reasons we love to fish for them...they are mean and will kill even when they are not hungry!
The downfall of crank-bait fishing is that they are tiring even for touring professionals.  They are typically heavy, large-bodied lures and the lips which help them get deep only works due to the resistance created when dragged through the water causing them to dive.  For someone who has a handicap, elderly or simply injured this can cause some serious fatigue on the wrists and arms from casting and reeling these lures in over and over. But, there are some solutions that may be the answer for this.

Most fisherman make the mistake of using what is obvious, their hands, wrists and arms.  I had the amazing privilege of spending about 15 minutes with touring pro Jason Quinn at a BassPro Shops Spring Fever event a few years back.  His instructional period was on deep water crank-baits and so after he was done teaching, I had the chance to question him about my situation and how he thought I could accomplish the task of reeling in these lures.  I was a bit surprised at his answer.  He said, "I couldn't stand on a fishing deck and do that all day either."  He went on to explain that just like any other athlete, it is important to get your core involved (see diagram below).  By placing his rod against his hip or under his arm and rotating his torso, he pulls the lure through the strike-zone, stopping to reel up the slack and swinging his rod back pointing at the target and then repeats the sweeping motion again and again.  This enables him to fish for long periods without tiring-out or becoming fatigued and also allows him to set the hook using his biggest muscles during the retrieve. 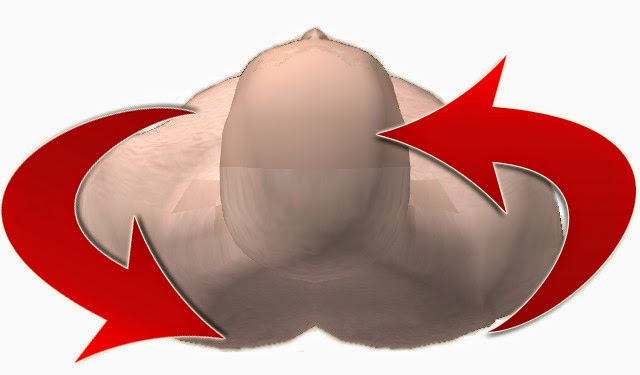 I tried it and it works!  I can last a lot longer and miss less fish because my hands and wrists are not tired from reeling.  Whether you are handicapped, elderly, or injured, involving the big muscles of your body especially your core is critical in sustaining longevity in fishing and the great outdoors.  Once I put a little bit of faith in the tip that Mr. Quinn gave me, it revolutionized my experience and gave me back a zone of fishing I had frankly given up on because after about an hour it just hurt.

Don't over-due it when casting.  The casting motion should be fluid, not jerky.  Allow the weight of the lure to propel it.  You typically can throw these lures a country-mile so no need to over exert yourself just getting it out there.

You don't have to rip the fish's lips off when setting the hook either.  Most of the time the fish will set the hook themselves when they hit the bait.  Just keep sweeping and reeling but don't get frustrated if you lose a fish.  It's just part of crank-bait fishing...you're going to lose some!

Lastly, "deep" is a relative term.  If you have ever swam in a lake, then you know just five feet down there is a big change in water temperature.  Bass will hold shallow all year long on the edges of flats to feed on shad or spawning blue-gill and retreat to any deeper water to get out of the stress the hot water might put on them but that may mean a change of only a few feet in depth.  If the deepest point of the water you fish is 6-10 feet, then target that.

Have a great summer of deep water cranking.  Leave no zone unchallenged!  Not only will you catch the biggest fish in the lake but typically you will find them stacked up in numbers also.