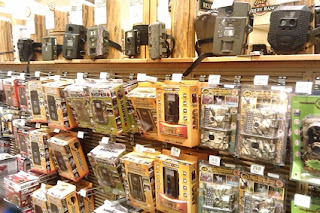 In the world of outdoor gadgets, there is nothing as innovative as the trail camera.  Before the dawn of the age of multi-megapixel-cameras, you had to get out and spend a lot of time scouting for deer sign yourself.  Although, that is still a highly desirable skill, trail cams have made figuring out the pattern of a trophy white tail much easier and without leaving your scent all over your desired hunting area.

We are talking about 21st century technology here with HD video, black infrared, less than half-second motion detection, and micro sd cards that can hold up to 32 gigabytes of info.  You can spend anywhere from just under $100 all the way to several hundred dollars depending on the technology that you want to deploy into the field.

There is a scenario for all the different styles of trail-cams and the manufacturers do a great job of delivering you something at your personal price point of sanity.  But, I like to ask the hard questions.  Which one really captures all of the evidence that is available for the hunter to pour over like a CSI detective?  Which one is truly the best?

David Blanton of team Realtree is arguably one of the best hunters alive for trophy bucks.  He along with some other pioneers virtually invented the modern hunting shows that you see on the Outdoor and Sportsman Channels.  He was recently in a commercial advertising his trail-cam of choice.  Check it out:

The PlotWatcher Pro is also highly touted by Dr. Deer himself, James Kroll.  Dr. Kroll is a big advocate of food plots.  Documenting deer in the middle of a food plot was virtually impossible until now.

The reason why these giants in the industry are sold on this particular trail-cam is because it delivers what no other trail-cam does...time-lapse footage.  It does this because it is designed to take a photo at consistent intervals that you choose from every 1-5 seconds to a minute in between shots.  I think the neatest feature of this trail-cam is that the pictures are saved in a video format.  So, you don't have to sit and scroll through endless numbers of photos.  You can view an entire day in about 3 minutes with time-stamp, moon phase, temperature, etc. all captured right on the picture.  Most importantly, is that for the first time, you get a true picture of what is actually happening at your food plot or corn feeder.

Even the fastest trail-cams on the market fail to capture your hit list because the deer is sometimes just out of range of the motion sensor.  The PlotWatcher just keeps on snapping shots.

I know what you are asking.  What are the draw backs?  It's a fair question.  The PlotWatcher Pro is one of the more expensive models on the market.  However, there are moments to splurge a little.  Lets not forget that this thing does what no other camera can do.

The other perceived flaw is that there is no infrared on the camera.  You set it to capture images during the daylight hours only.  But, I would also point out that while other trail-cams do capture images and video at night, I don't know of a single state that make it legal to shoot a deer at night.  The PlotWatcher Pro helps you to pattern a deer in the hours that you can actually engage the animal.

In the original model of this camera, the battery life was a big downer.  However, that has been remedied in the newer Pro model.  The average life of the batteries is almost 3 months.  You can take a million pictures on one set of batteries with this camera.

Check out the video done by Toxie Givens of Reality Hunt Club fame where he demonstrates and illustrates just what the PlotWatcher Pro can do for you:


A truly powerful gadget and one I have recently added to my personal stable of gear.

Follow me on Twitter next week as I will be fishing for Amberjack in the Gulf of Mexico on top-water - w00t!
Posted by Handicapped Outdoors at 9:44:00 AM
Email ThisBlogThis!Share to TwitterShare to FacebookShare to Pinterest