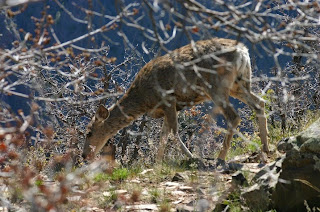 It's the most wonderful time of the year!!  Bow season is open here in the great state of Louisiana.  And, on the opening weekend the score is deer 3, Anderson 0.  Yes, I got skunked or better stated maybe is I got coyote-d.

In early September, we placed a Plot Watcher Pro time lapse trail camera out to document early season patterns.  What we discovered was good and troublesome all at the same time.

The good news is that we documented about 6 deer regularly moving from their bedding areas into a nearby tree-line that holds plenty of edibles.  We placed a feeder in between these two spots to collect images on our herd.

Two adult does were regular entertainment on the camera however, neither of them had fawns and the reality is they should have.  The other species captured on camera was a large adult coyote along with a couple of smaller ones.

At first I wasn't too alarmed.  After-all, coyotes have been in this area for a while and I wasn't too sure the impact they might have on our herd.  This past Sunday evening, my thoughts and suspicions transformed into reality.

A plane over-head was in a landing pattern coming into Shreveport.  As it slowed, it began to make that whining sound that jet engines can make.  It evidently hit the right frequency for the coyotes because they erupted into singing at the whining of the engines.

First of all they were closer than imagined, less than 400-500 yards away from my hunting area.  Secondly, there were many more of them than I had thought also.  Needless to say, I began making plans to have my hand gun with me the next time I go hunting in that spot.

Once I got back home, I began feverishly researching the effects of coyotes on deer population and wow is there plenty of stuff out there from very reputable sources.  In one study, they collared 60 fawns right after they were birthed.  Within months, 43 of those fawns were taken by coyotes.  This equates to 80% of the kills being attributed to them which is a phenomenal success rate. (For the complete article on The Studies)

One of the guys in that article is one of my favorites in wildlife biology, Dr. Grant Woods from Bass Pro Shops 1 Source.  Check him out in the video below discussing the effects of predators on your whitetail deer population:


We are putting together an eradication game plan now and I will keep you posted in the future!
Posted by Handicapped Outdoors at 6:33:00 PM
Email ThisBlogThis!Share to TwitterShare to FacebookShare to Pinterest