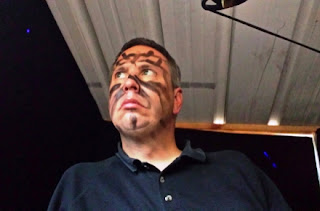 'Tis the season to be hunting and boy have I been busy.  Sorry for no articles for the past two weeks but I have been working on my craft.

In the past two weeks, I have tried something that I wanted to share with you.  I have learned to be wary of a lot of what is advertised on TV shows as the next greatest product that is certain to bring in that monster buck. 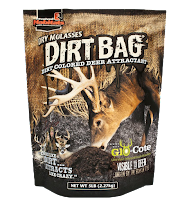 Right about now, I would be thrilled with anything that is brown and has four legs to walk by my stand.  Just as I was beginning to think that coyotes have permanently run all of the deer out of my area, I decided to try one of those products advertised on TV.  It's called DirtBag.  It is essentially a dried molasses powder that satisfies a deer's sweet-tooth.

This stuff is real high-tech too.  You open the bag and pour it out on the ground...done!  My kind of stuff.  True to it's name, it looks like dirt.  If you didn't know where you put it out, there is a great chance you would walk right over it or even in it because it looks so much like dirt.  See the pic below to get an idea.  This is exactly how I put it out. 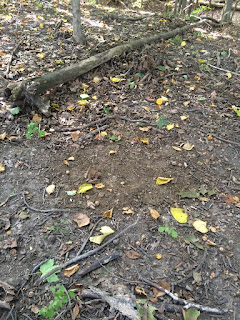 I am sad to report that I forgot to put my Plot Watcher Pro on over-watch to catch the action.  And, there was evidently, a lot of action.  After 3 days of launching the stuff, the pile was gone and the deer had dug the ground up trying to get at the left-overs.  They also dismantled the corn that was about 15 yards away that prior to my deploying this stuff, they had basically ignored.

I am going to do the experiment again very soon, with the camera in play.  I am excited to see the video results.  You can pick up your package of DirtBag at your local Bass Pro Shops.  According to the ads for it, the powder glows to a deer.  So not only do they smell it but they can see it too.

I have to confess that I am a believer after seeing how quickly they devoured the powder.
Posted by Handicapped Outdoors at 8:27:00 PM
Email ThisBlogThis!Share to TwitterShare to FacebookShare to Pinterest