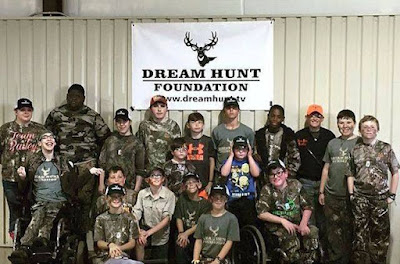 In the month of October, there were two weekends where my incredible friend, Jeff Warren, took around 30 kids on their dream hunt of a lifetime.  These young people live challenged lives, some of which are on a time-table for when their time on this side of eternity will be over.  The Dream Hunt Foundation fulfills their wish and man is it a powerful thing.

Now understand gang that this isn't your average operation.  Each kid gets a guide and a camera-man to film their hunt.  And boy did they lay some brown on the ground.  One young man even killed two hogs - w00t!

I was bringing an encouraging talk to them just before lunch, so I wanted to get there an hour early and was I ever glad to do that.  Some of them were already coming in from the morning hunt, as I pulled up.  My jaw literally dropped open at seeing what some of these young people were bringing in.  There was an entire horn section and I don't mean an orchestra.  Truly a thing of beauty! Check the slide-show below:


It was a sea of smiles with kids, parents and grandparents all grinning from ear to ear.  I was high-fiving, hugging and hand-slapping complete strangers I was so geeked up.

If they weren't able to shoot one in the morning, no big deal! Lunch was all you could eat BBQ sandwiches, then a little fishing just to relax and then back out for the afternoon hunt.  If a child still didn't convert, Jeff takes them again at a later time.  Amazing right?

One of the hunts was so touching that I wanted to share the video with you.  Little Bryce had to use a Sip/Puff mechanism to make the shot and he was spot on.  Enjoy!