Say Hello To The Ogo

Every now and then a truly new concept comes along.  I saw this thing called an Ogo on Facebook and immediately became interested in writing about it.  It's a new envisioning of the older electric wheelchair.

I reached out to the Ogo's designer, Mr. Kevin Halsall.  This was no ordinary interview.  Kevin resides in New Zealand, while I am in Louisiana in the U.S.A., but thanks to modern technology, the internet and Skype, it was as easy as making a phone call. 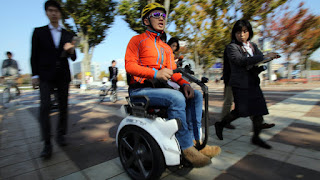 The Ogo is Kevin's baby.  He began dreaming of something for his friend, Marcus, who is a paraplegic.  The chair starts with a base that is actually the popular stand up vehicle the Segway.  That's right, a 2-wheeled self balancing machine is going to support a disabled human that typically needs 4 wheels.  Right from the start, I liked Kevin's attitude and vision.

The Segway is an excellent choice as it is tough and is itself an entire rethink of how mechanized things should operate.  It's two wheeled, which immediately gives it a smaller foot-print and is surprisingly off-road capable.  The biggest change from normal is that it is controlled hands free.  The person controls the chair with weight just like the Segway which gives the operator much more normal movement and freedom.

It can go off-road by adding thicker tires which can be purchased additionally.  It has a weight of 143 pounds which is much lighter than any other electric chair and especially those that can go where the black-top ends. The only draw back is that with the off-road tires, it is not A.D.A. accessible. With the regular width tires, it is and can comfortably fit through any accessible doorway or ramp. 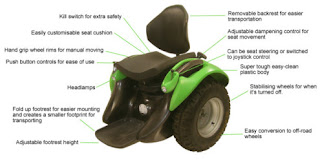 It can handle a 30 degree slope just like the Segway and has a max speed of about 12 mph depending on the surface being conquered and the weight of the operator.

Kevin built the Ogo stage by stage as he could afford it, having his buddy Marcus testing it the entire way to failure which is important for you and I.  Kevin was honest and said he has been surprised at how many types of disabled people can operate the Ogo comfortably.

Are modifications available?  The Ogo can be customized rather easily to accommodate a much wider range of operators.  Seat adjustments can be made to fit your specific needs by request.

I asked Kevin how many investors have attempted to jump on the Ogo wagon.  He said there have been many and that he has been leery of allowing any of them to join this new concept.  He prefers to keep it organic with people like you and me.  His goal is to keep the cost as low as possible for everyone.

Starting price tag is $13,000 at present and Kevin is hoping for the Ogo to be released to the public by early 2017.

Posted by Handicapped Outdoors at 3:58:00 PM
Email ThisBlogThis!Share to TwitterShare to FacebookShare to Pinterest