It's hot!  Welcome to summer 2016.  The All-Star baseball game and Wimbledon are in the books and the dog days of summer are upon us.  This is a time of year that can be difficult to get fish to hit.  Fortunately, I have the answer for you in this article. 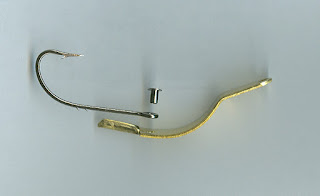 It's funny how some things can be so old that they become "new" again.  There is nothing better than a great rediscovery of a former trusted tool.  The Wobble Head Worm Rig is just such a discovery.

To look at it you would question whether a fish would run from it rather than aggressively striking it.  But the truth is many a professional fisherman still use this rig and win tournaments in the south during the hottest months of the year.

As the name says, the metal piece at the top causes the entire rig to wobble through the water.  This rhythmic wobble creates aggressive strikes and is endless fun for any lake or pond.

For the disabled fisherman, the retrieve is super simple.  Throw it and reel it..that's it!  Not too fast and not too slow but a nice methodical retrieve can cause vicious hits.  If you are using a medium/fast tipped rod, the fish will virtually set the hook for you, which is nice. 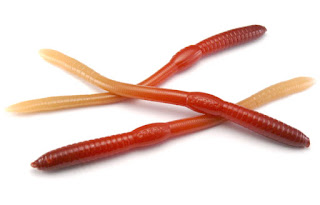 The real trick to the rig is it MUST be rigged with a straight bodied and tailed worm.  The twist or wiggly tail worm will only cause problems and work against you with this rig.  So, since the wobble head rig dates back to the early 70's, there is no better worm to use than the original Creme Worms.

I grew up with these plastic worms.  They were the king of the fishing industry until Mr. Twister put a big dent in their reign with advent of the curled tail worm.

The Chairman of our board at Handicapped Outdoors was using a wobble head rig just a few weeks ago at his home and landed two fish around the 3-4 pound class within an hour or so of fishing with it...it works!

We have a local fishing shop that sells these.  You won't find them in a the super stores for outdoors.  You can order them Here online.

There are even ways to fish it weedless or add a trailer hook to it.  See the diagrams below.

Posted by Handicapped Outdoors at 11:21:00 AM
Email ThisBlogThis!Share to TwitterShare to FacebookShare to Pinterest