UPDATE 8/13/16 - **This tip is strictly for Crossbows and does not apply to regular bows whether traditional or compound.  The shortness of the crossbow bolt is the driving need for the additional weight.**

Can you believe it?  60 days until the opening of bow season here in Louisiana on October 1st.  I am more excited than a kid in a candy store.  I feel like Ralphie in "The Christmas Story".  Just this past week, I was given a new tip that I wanted to pass along to all of you crossbow hunters out there. 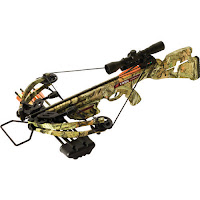 In the world of crossbows as well as regular bows, weight plays a tremendous part in how an arrow flies and with the amount of energy it has when it arrives at the target.  Now logic says that less weight means faster flight in feet per second from the force the string exerts on the arrow.

However, the less the weight also means less accuracy is going to occur during the flight path of the arrow.  I have been shooting 100 grain tips and I am very accurate at short ranges.  If I wander out past about 25-30 yards, suddenly my groups are not so tight.  So much so that I would likely not take a shot past 40 yards on an animal ever.

I have been thinking it was the scope or maybe I am jerking the trigger.  Truth is it may be as simple as moving from a 100 grain tip to a 125 grain tip.  That extra weight will slow the arrow down a fraction but it will also stabilize the flight.  On top of that, the added weight will also deliver more of a punch down range as the arrow impacts the target.

Update:  This tip is specifically for bows and crossbows that shoot above 300 feet per second.

I am going to make the switch in the coming weeks and will give you a report in September.  One thing to remember is to also pick up some field points that are also 125 grain so that your practice is an exact match to your actual hunting shots.

Try it out and see if your accuracy goes up out to 40-50 yards with tight groups.

Posted by Handicapped Outdoors at 5:55:00 PM
Email ThisBlogThis!Share to TwitterShare to FacebookShare to Pinterest